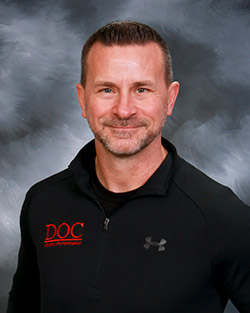 Mark, originally from Robinson, IL, has lived in Decatur and Mt. Zion since 2000. He has been involved in sports and fitness as long as he can remember. He participated in basketball, football, cross country, and track in high school. He was particularly influenced by his track coach who helped a scrawny, under-talented kid realize that hard work could help compensate for a lack of raw talent.

Before joining DOC, Mark owned and coached at CrossFit MTZ for 8 years. His focus at CrossFit MTZ was helping anyone and everyone discover how to be more fit than they imagine they could be as well as how that fitness can have a significant positive influence in all areas of life. As the father of a boy that loves any sport involving a ball, Mark’s professional interests have evolved into helping young athletes build their athletic foundation.